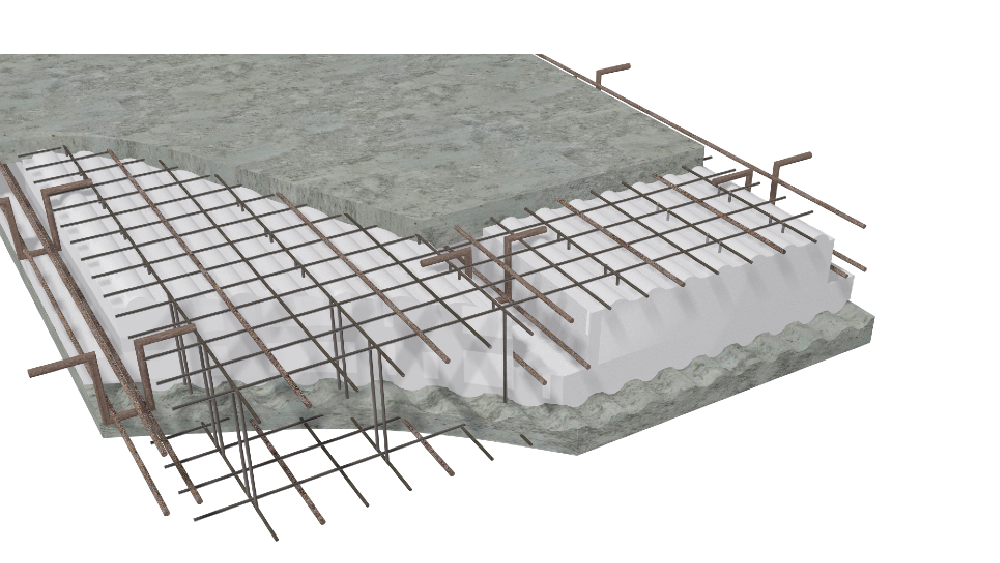 It is known that the Advanced Construction Solution MK2, with D.I.T. 455R/20, is characterized by combining the structural capacity of reinforced concrete with the thermal insulation capacity of EPS, which allows solving the structural needs of insulation and enclosure of the building with a single construction system that scrupulously adapts to the requirements of the current CTE and EHE.

It is very remarkable, in this constructive system, the capacity to solve all the enclosure with a continuous insulation, even in the joints between horizontal and vertical elements, without the need to include structural elements such as columns and beams that may imply thermal bridges that may damage the insulating capacity of walls, floors and roofs.

This characteristic of the system allows that the thermal isolation that reaches the realized buildings is one of the most outstanding qualities of this system, allowing the best valuations in energetic certification in a much simpler way that with traditional systems. The continuity of the isolation and the facility to obtain the hermeticity of the different atmospheres with this constructive solution, put easily within reach even the attainment of a certification Passivhaus, according to studies of architects who work with this one.

But one of the most common questions we are asked is related to the galvanized steel connectors that maintain the integrity of the different layers that make up the system. Don’t they produce a considerable decrease in the thermal properties of the system? Don’t they represent an important thermal bridge?

The MK2 panels have 80 connectors per m2 of galvanized steel with a diameter of 3 mm, which are responsible for joining the steel grid on the exterior face with that on the interior face and for containing the EPS confined between the two meshes.

It is logical to think that there will be a more relevant and rapid transfer and dissipation of heat transversally, with the surrounding EPS, than longitudinally along each connector.

But we shall now study the repercussion of this geometry numerically, from the point of view of heat capacity and thermal transmittance, in an MK2 wall made up of panels of the PN or PR 140 type (21 cm total thickness), the most commonly used for an enclosure:

The heat capacity or thermal capacity of a body is the quotient between the amount of heat energy transferred to a body or system in any process and the change in temperature it undergoes. In a more rigorous form, it is the energy necessary to increase the temperature of a certain substance in a unit of temperature.

“C” is the heat capacity of the material

“c” is the specific heat of the material

“m” is the mass of the material

A wall surface of the MK2 system of 1.00 m2 is then studied, without considering the effect of the connectors. For the materials used in the MK2 system, the following table is obtained

The table below considers the variation in the heating capacity of the wall caused by the inclusion of the effect of the 80 connectors:

The result is that the connectors have an effect of 0.29 % on the heat capacity of the wall, which is practically negligible.

The thermal transmittance U is the measure of the heat that flows per unit of time and surface transferred through a construction system formed by one or more layers of material, with parallel flat faces, when there is a thermal gradient of 1°C (or 1K) of temperature between the two environments that it separates.

At the points of the connectors, it will be obtained:

The enclosure area, per m2, that does not contain connectors will be:

To calculate an average transmittance, we’ll have

The difference between the transmittance value with and without the effect of the connectors is 0.003 W/m2-K, a very small value, also in this case.

previousTutorial on the assembly of MK2 panels.

nextTraining for installers: a necessary support

You can find out more about what cookies we are using or disable them in the SETTINGS.

This website uses cookies so that we can offer you the best possible user experience. The cookie information is stored in your browser and performs functions such as recognising you when you return to our website or helping our team to understand which sections of the website you find most interesting and useful.

If you disable this cookies we will not be able to save your preferences. This means that every time you visit this website you will have to enable or disable the cookies again.