MK2 is a Construction System based on a set of corrugated expanded polystyrene structural panels, with a basic reinforcement, attached to the faces, consisting of high-strength steel mesh and corrugated bars, linked together by electro-welded steel connectors.

These panels are placed on site according to the arrangement of walls, partitions and slabs that the architectural or engineering project in question presents.

The functions contained in the elements of our construction technology are:

All these qualities are possible thanks to the combination of the three component materials (Expanded Polystyrene, Steel and Micro-concrete), which together make up a sandwich panel.

Said panel has mechanical qualities that depending on the resistance of the applied micro-concrete and the thickness of the expanded polystyrene core, allow design resistances of up to 600 kN / m to be achieved in simple compression and up to 14 kNm / m in simple flexion.

In this way, multi-storey building structures can be made with a limitation that will be basically given by the load capacities of the vertical supporting elements, according to the criteria expressed in the previous paragraph. 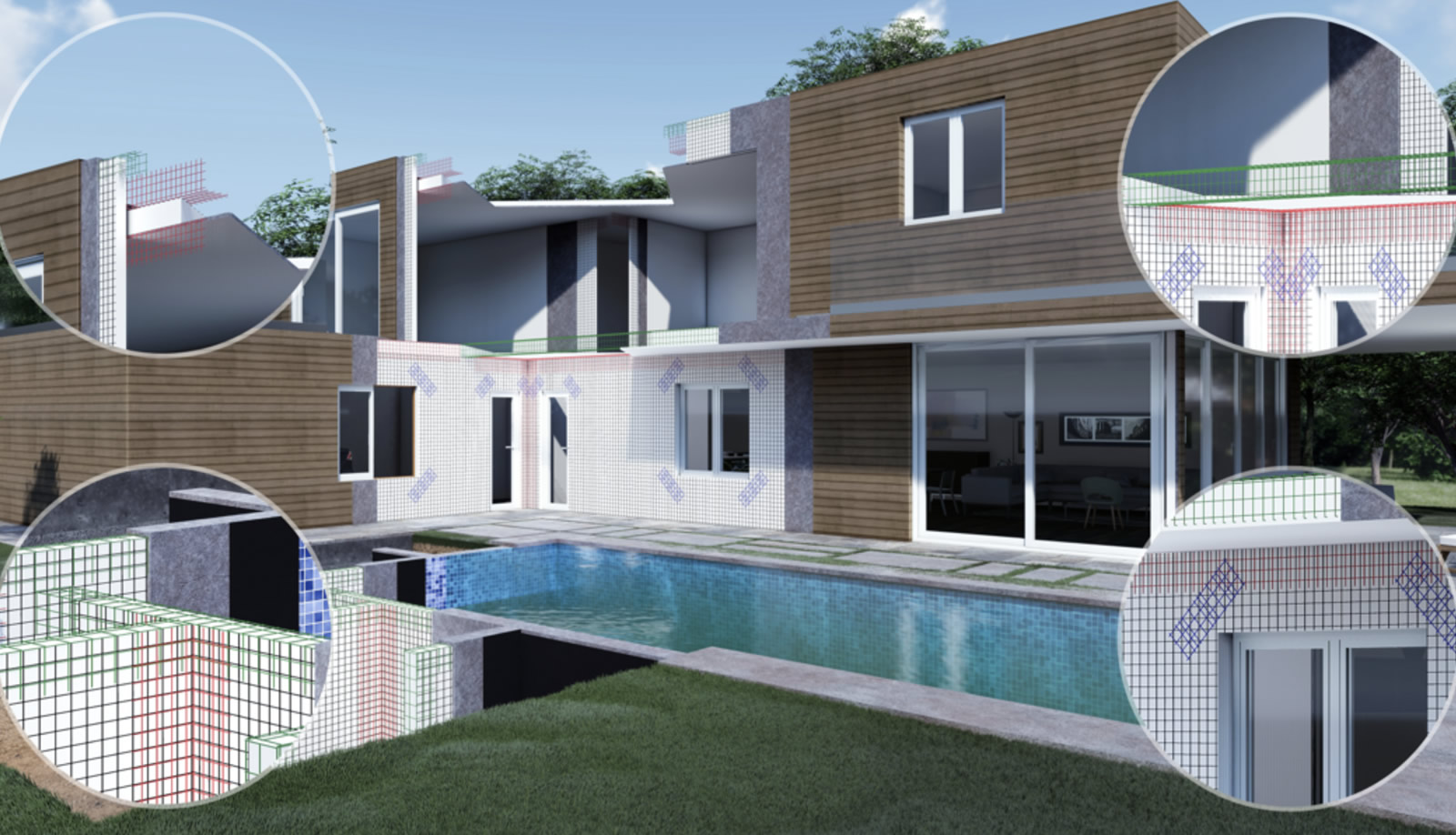 Thermal insulation
The MK2 structures based in the Emmedue panel respond perfectly to the supporting and insulating function. The thickness and density of the panel can be customised depending on the specific thermal insulation that has been chosen with much higher levels of thermal insulation than traditional construction enclosures.
Acoustic insulation
Environmental noise is one of the biggest problems in industrialised countries. With an acoustic insulation of 43.50 dBA on average in the single panels, with the concrete thicknesses marked on each side (3.5 cm), the System satisfactorily complies with the DB-HR acoustic standard without the need for extractions or addition of other materials in most cases.
Installation speed
The modularity of the MK2 Panels enables the development of easy-to-assemble solutions allowing reductions in the execution time of a building compared to other construction methods of up to 40%, providing great ease for meeting deadlines for builders and improving the return of investment through promotion.
Cyclone resistance
The constructions made with the MK2 Advanced Construction Solution located in areas with a high risk of hurricanes, have demonstrated their ability to resist the most extreme cyclonic forces, including those of category 5 hurricanes.
Versatility and compatibility
The MK2 Advanced Construction Solution enables versatile and efficient construction with the possibility of applying it to all types of projects and architectural designs independently or in conjunction with other more traditional existing construction systems based on steel, wood or concrete.
Multiple finishes
The walls made with MK2 Panels can be completed, in terms of the finish, both by applying a coating directly on the rough plaster and, alternatively, traditional paints on the smoothed plaster. Therefore, it is possible to use any type of cladding, including stone panels or ventilated facades.
Fire resistance
The MK2 Panels are made with self-extinguishing type expanded polystyrene, which is also enclosed between two layers of reinforced concrete that line the sides of the panel preventing its combustion. This enables fire resistance values of over 180 minutes.
Energy efficiency
The thicknesses of EPS the system uses guarantee much greater thermal behaviour of the building than traditional systems. Thus, the buildings built with this system reach the best levels of the energy classification very easily with the capacity to obtain high-ranking Energy Certificates, generating real savings on bills.
Earthquake resistance
The proven resistance of buildings built with the MK2 construction solution is one of its strengths. Its own light but rigid configuration, as well as the quality of the materials used in the panels, give it a high resistance to seismic movements or earthquakes.
Structural strength and lightness
The MK2 Panel, before the application of the concrete, has a weight that ranges between 3.5 kg / m2 and 5 kg / m, making it not only easy to transport and apply, but also of a very high structural resistance due to the two layers of reinforced concrete that interact creating a box-type envelope of the entire structure, that is, the stress produced by the loads is perfectly distributed over the entire surface of the panel.
CONTACT

The Solution has a Technical Suitability Document (No. 455R / 20), issued by the Eduardo Torroja Institute of Construction Sciences, which recognises it as a valid constructive solution for building in Spain and determines the control and quality processes in the manufacture and commissioning of the panels.

It should be noted that, thanks to the international strategic alliance that ITESSA maintains with EMMEDUE and the use of machinery supplied by this company for manufacturing, this Construction Solution has several approvals in different countries, including: 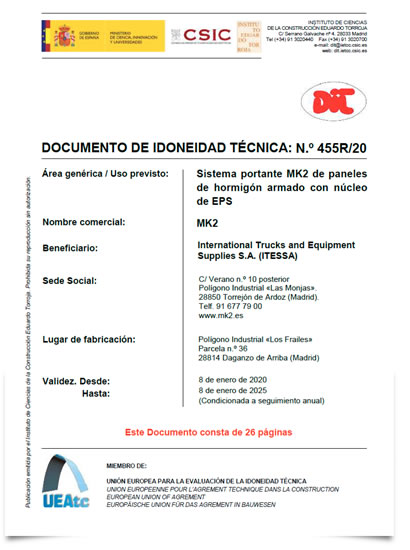 The MK2 Construction Solution makes it easier to obtain the Passivhaus certification. This is a document that officially recognises that houses are worthy of being considered sustainable, and it is a request that every day more people around the world are trying to achieve, since it has multiple and positive consequences.

Facilitates certification by measuring and verifying a series of sustainability requirements, such as thermal insulation, the quality of the air inside the house or the use of solar energy, the Passivhaus Institut is in charge of rating that the house adapts to the insulation standard. 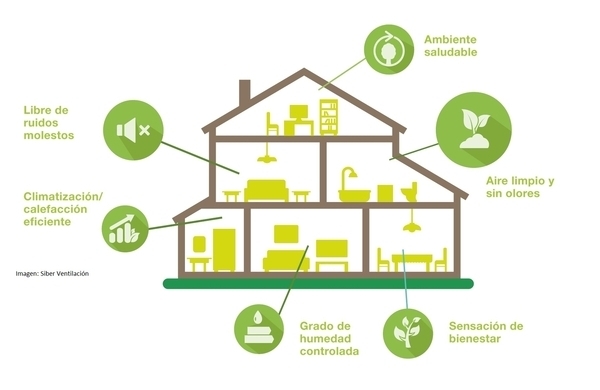 You can find out more about what cookies we are using or disable them in the SETTINGS.

This website uses cookies so that we can offer you the best possible user experience. The cookie information is stored in your browser and performs functions such as recognising you when you return to our website or helping our team to understand which sections of the website you find most interesting and useful.

If you disable this cookies we will not be able to save your preferences. This means that every time you visit this website you will have to enable or disable the cookies again.